Commuting along Anzac Highway to the show grounds for Science Alive

Today I took the bakfiets to the Wayville Showgrounds where I was presenting at the Science Alive event as part of National Science Week.

I was curious how long it would take me to get from my backdoor to inside the show grounds, suspecting that since I was leaving during peak hour that it would not be too different to driving.  My chosen route was Marion Road, Anzac Highway, Leader Street.

Easiest way to time it was to take a picture of my watch while loading the bike at home, and then another once in the show grounds. 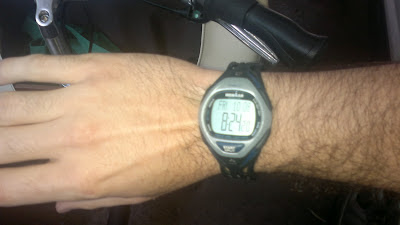 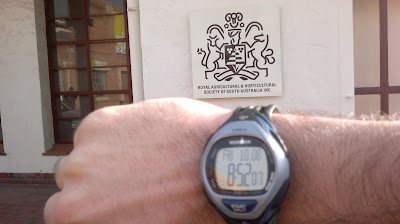 The verdict, just under 26 minutes.  Google Maps directions by bicycle suggests that it should take 29 minutes to cover the 8km.  So apparently I am as fast on a bakfiets as Google thinks a normal person on a bike should be.

On Marion Road I wasn't able to keep up with the traffic, but once I turned onto Anzac Highway, I was going substantially faster than the car traffic.  Good for me, but not good for the car traffic, since I was only doing 18 - 23km/hour.

I did have some problems with the slow traffic on Anzac Highway, with a bus and truck sitting so far left that they stuck into the already narrow bike lane.  One point in particular the gutter that is part of the bike lane was quite broken, and hard to see in advance, which led to a few tense seconds.  It would be nice if the bike lanes on Anzac Highway were upgraded as the rest of the road has been.

As many Adelaideans know parking in the show grounds is notoriously policed, so I decided to get into the spirit by using the exhibitor's parking permit that had been mailed out to me.

The permit instructions were quite particular that the permit had to be visible through the windscreen of the vehicle.  No problem with the weather canopy. 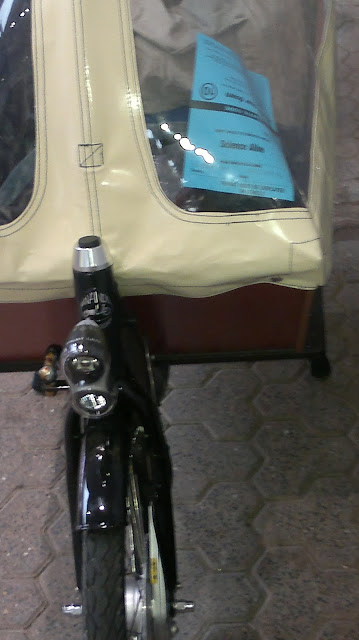 I was only occupied with official duties for about half an hour, so spent the rest of the time wandering around and looking at various things.

I also took a couple of videos that I will attach when I can.

Posted by Paul Gardner-Stephen at 4:16 AM