As some of you may know, in my other life I am a humanitarian telecommunications research fellow, and leader of the Serval Project.  This means that I am quite interested in finding interesting ways to charge mobile phones.

Since I got the bakfiets, I have been eyeing off the dynamo hub that produces 2.4W of electrical power at 6V.  I am not the only one who has had the same thoughts.  In fact, there is a commercial product now that provides a powered USB port from the hub dynamo.

But I wanted to make it myself.  So I had a look around, and found a post with a simple circuit to do the same job. This was a quick weekend hack, so I went to Jaycar Electronics to get the five components and a sacrificial USB cable, with the intention of using some spare breadboard.  I then discovered that I had run out of breadboard.

But I still wanted to make it, so I used cardboard instead of breadboard, and poked the components through, bent the legs on the components so that I could solder them together the right way, and continuing the stationery substitution theme, used a couple of staples to bridge the distance in a couple of places, soldered it all together, and used the display packet from the USB cable in place of a proper project box.

The pragmatic albiet not photogenic result is below. Apologies for the poor focus, as my E7 phone has trouble focussing on things close up.  But hopefully you get the idea. 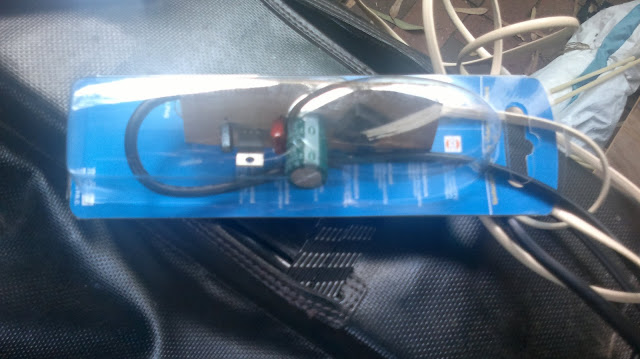 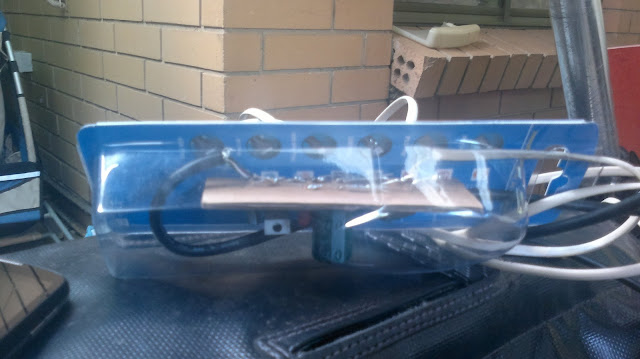 I then connected a couple of extra wires into the dynamo connector, and routed and cable tied some old phone cable to connect it all up.  The circuit and USB connector live in one of the pannier bags. 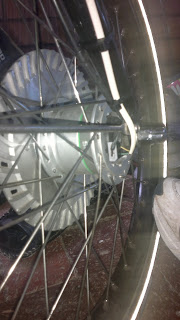 You can see the routing into the pannier here. When I get enthused at some point, I will replace the highly obvious beige cable with something a little more discrete and black. 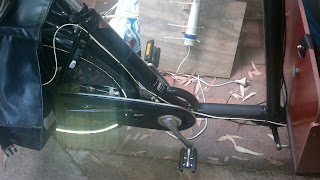 Then it was time for a test ride.  The elastics on the top of the cargo rack on the back hold a phone nicely in place. 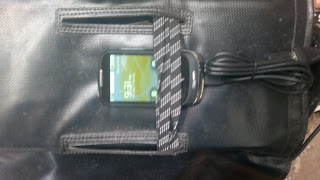 I then set off to work and back, about a 45 minute return trip.  I knew from other's experience that about 8km/hour is needed to get useful output from the dynamo.  About 15 minutes of this trip was below that speed, as I plodded up the 130m climb to my work with Caleb on board, leaving about 25min - 35min of useful charging time.  I also forgot that the phone I used was set to have it's screen on while charging, which slows the charging time down.  Nonetheless, the phone went from 69% to 85%, proving that my cardboard and staple USB charger works.
Posted by Paul Gardner-Stephen at 3:24 PM