Free Parking at the Airport

As I mentioned in the previous post, I flew to Canberra this past week.

The whole airport dropoff/pickup/parking/taxi thing is always an added hassle.  There never seems to be a good solution that doesn't cost a lot.  Taxi's are great, but sometimes you have to wait a long time, and the cost is not insignificant.  Public transport really isn't an option if you are travelling with a big suitcase.  Drop-off and pickup can be tricky if you have small kids and the flights are at odd times (my return flight was scheduled for after 9pm), and parking at the airport for a week requires a second mortgage.  That is, unless you decide to ride your bike to the airport.

I forgot to take a picture of where I actually parked the bike, but it was in a space underneath the Qantas lounge at the Adelaide airport, next to one of the security staff areas.  This is a good place to park a bike for a few days, because there are always airport staff coming and going, and having a smoko.  Nonetheless, for the first time I actually used a 2nd lock on the bike, just to be sure.

I was travelling with a full 23kg 81cm international-size suitcase, a maximum cabin size wheely bag, and a suit bag.

I was surprised that it only took me half an hour to ride the 9km to the airport.  Coming home into a headwind was only marginally slower, at about 40minutes, including a couple of short stops to stretch some post-flight stiff muscles.

Coming home, I decided I would be a bit cheeky, and bring the bike into the terminal and load my suitcases directly in, rather than have to lug them out.  After all, a bakfiets is basically just a trolley with pedals. You can see it here next to the carousel. 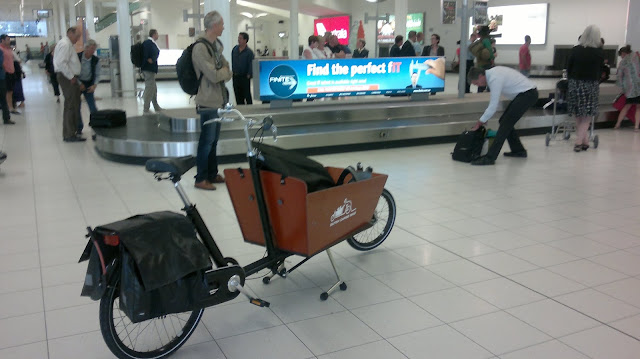 No sooner had I parked there than an airport staffer came over, I assumed to tell me that I had to take it back outside (which I would have been happy to do).  Instead, it turned out he was Dutch, and apparently he had posted a picture of the bakfiets parked at the airport the day I flew out, and it was causing much interest among the local Dutch community on Facebook.

A couple of minutes later my enormous Antler case came around the belt, and I was out the door and riding away in no time at all.

Well, nearly no time at all, because to exit the building I had to pass the Qantas Valet Parking desk, which was a photo opportunity that I could not resist.  You can even see that they have a space next to the desk big enough to park the bike.  The desk staff were quite amused to see a heavily laden bakfiets roll past. 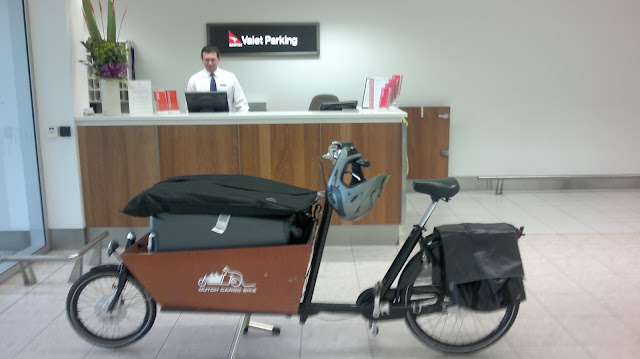 If possible, riding a bakfiets full of luggage covered in airport tags attracts even more curiosity than normal.

In any case, the whole episode was successful, convient, and a lot of fun, and I would certainly do it again.


Posted by Paul Gardner-Stephen at 3:23 AM