Replacing rear-tyre on a cargo bike in pictures

After 4,500km of heavy riding (including up that hill to work every day) the rear tyre of my bakfiets was getting a bit sad.  The tread was getting low: 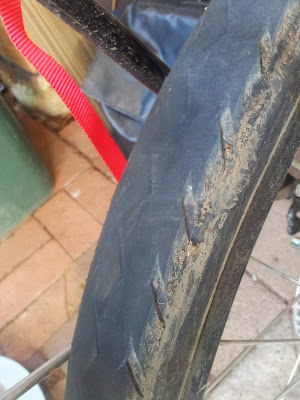 But more importantly, a loose spoke that I found and tightened a couple of weeks ago or some other cause had caused the wide-wall to partially rupture, resulting in a large bulge that made the bike feel a bit like a clown-bike, bumping up and down every revolution: 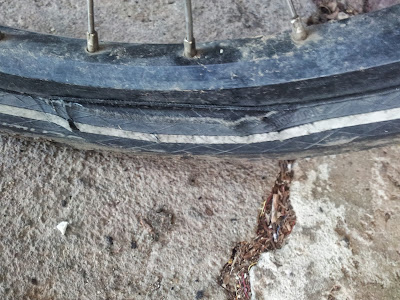 The first step was to lift the rear wheel off the ground.  A cargo strap and handy verandah beam made this easy: 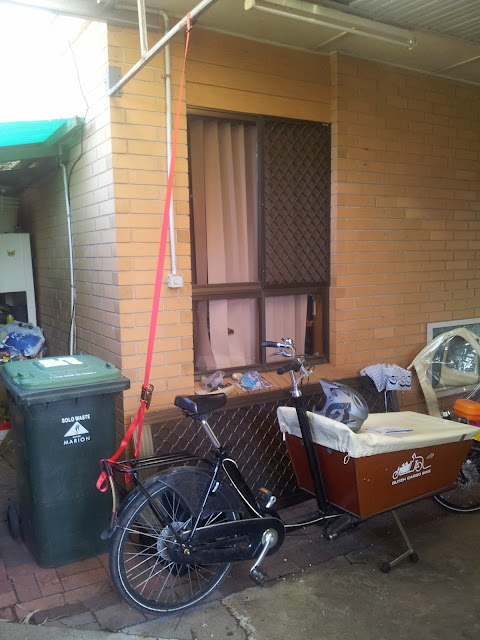 Resulting in a convenient air-gap under the wheel: 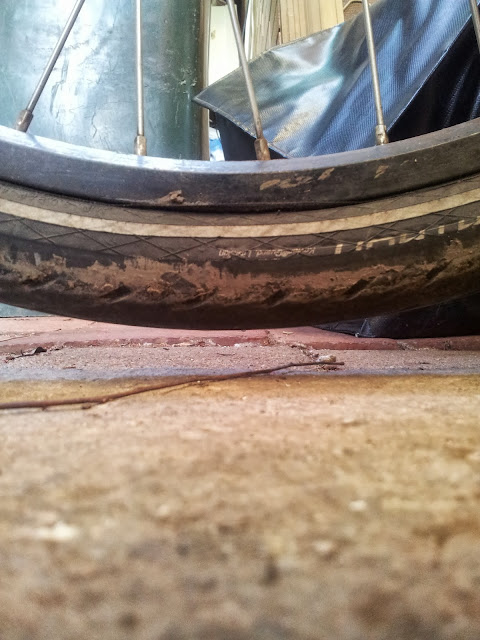 Next step is to undo the screws on the side of the chain case so that it can be loosened off. The pieces can stay attached, as we only need to be able to move the wheel around and get the chain off of the rear sprocket. 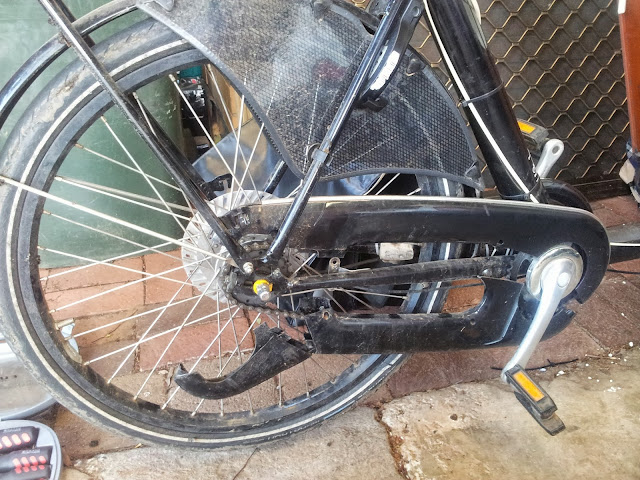 I had oiled the chain a little last week when it started making some noise, but apparently it needs more oil than I gave it. I applied the oil after changing the wheel to reduce mess.  The real reason for taking this picture was to show the bolt and nut to the right of the sproket.  There is one of these on both sides of the hub. 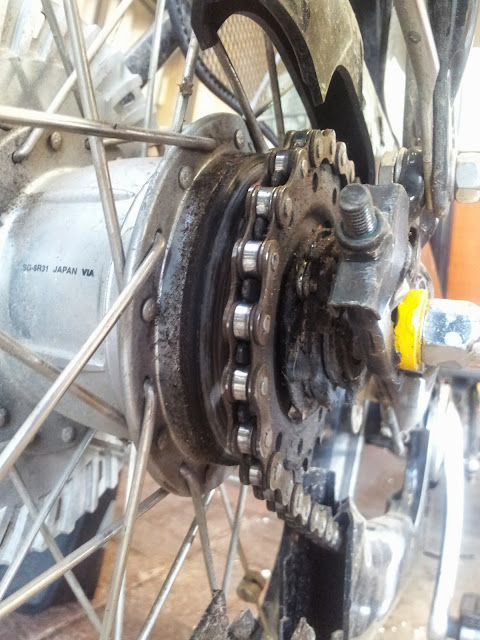 These need to be undone completely, and the little retaining plate removed on both sides: 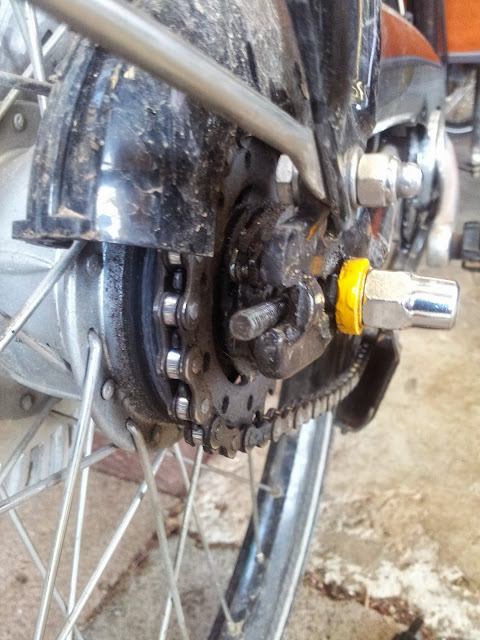 Now release the cable from the roller brake. This is quite easy to do, but hard to photograph the process of doing so. First, undo the bolt that holds the brake to the frame. Then pull the bolt where the cable connects to the roller brake to release tension on the cable, then pull the cable to release it from the lug just below the bolt that you have undone.  The brake is now free of the frame, allowing the wheel to be eased out of the frame. 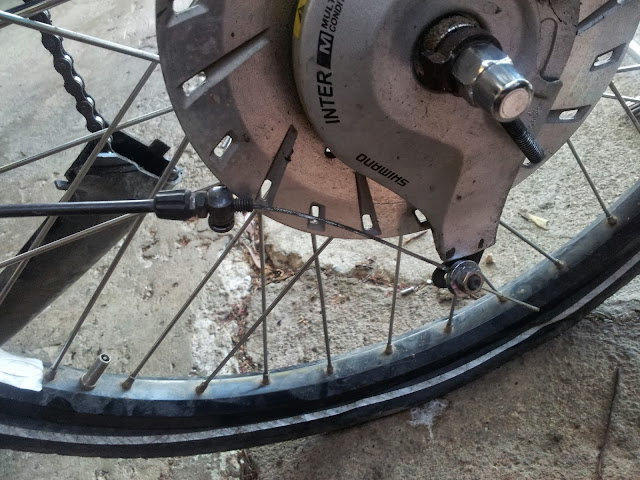 Once that is done, and after jacking the wheel up higher, I was able to ease the axle and hence wheel out of the frame with a bit of fiddling: 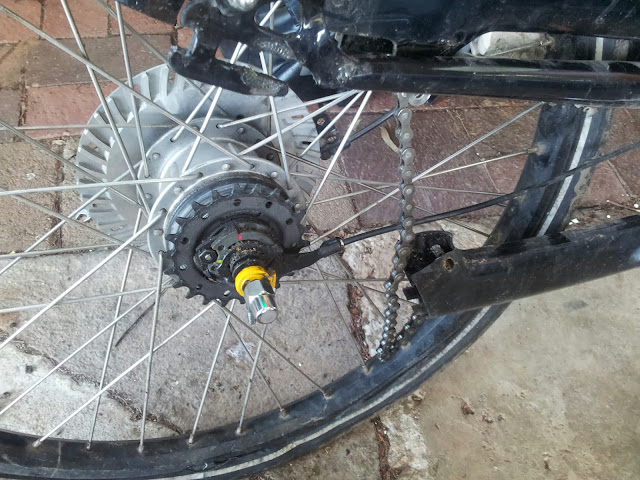 Tada, no wheel in the frame.  Note that I left the Nexus 8 gear cable connected, since there was no need to remove it. 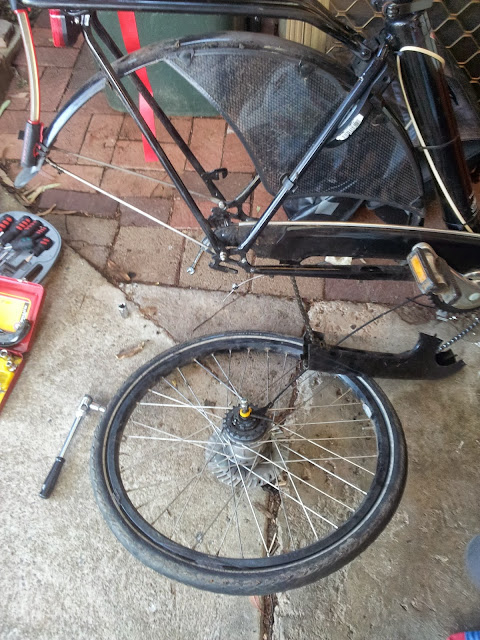 Then I removed the tyre and tube.  I was able to do this without even using tyre levers, but you might want to use some: 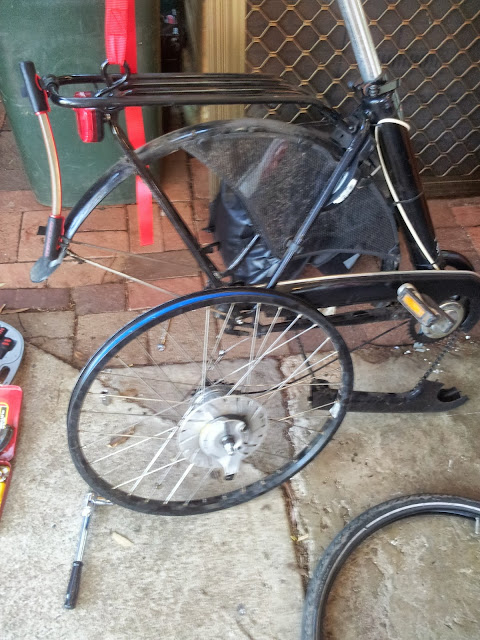 Then it was time to get the new tube ready, for which I had help unrolling it: 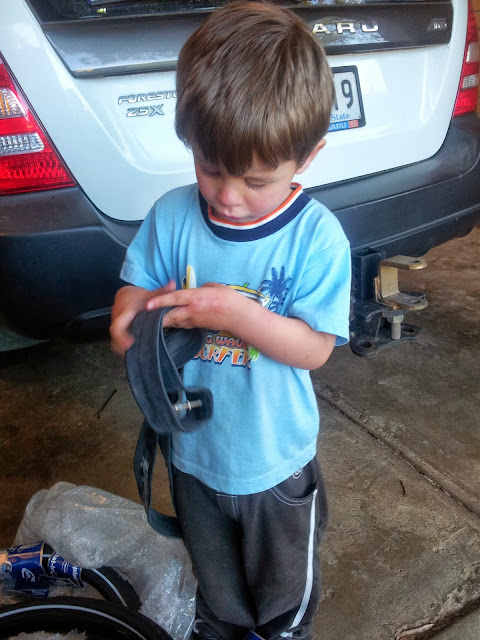 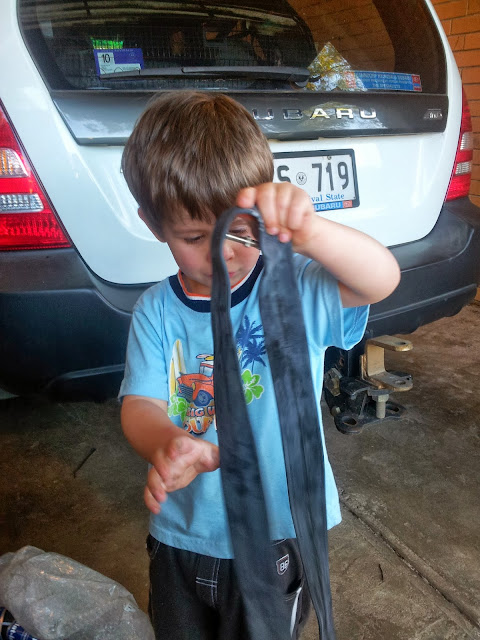 Then it was time to get the new tyre ready.  I am using Schwalbe Marathon Plus tyres which claim to be the ultimate in thorn-proofing.  They are cited as being "quite heavy and awkward to fit".  I don't think they are particularly heavy or awkward to fit -- again, I didn't even need tyre levers to get the new tyre back on.  And compared to the weight of the rear wheel, the tyre is quite, quite insignificant.  And like all Good Sensible Tyres they have a 3M reflective strip for night visibility way better than any wheel reflector provides, and without the weight imbalance that reflectors provide: 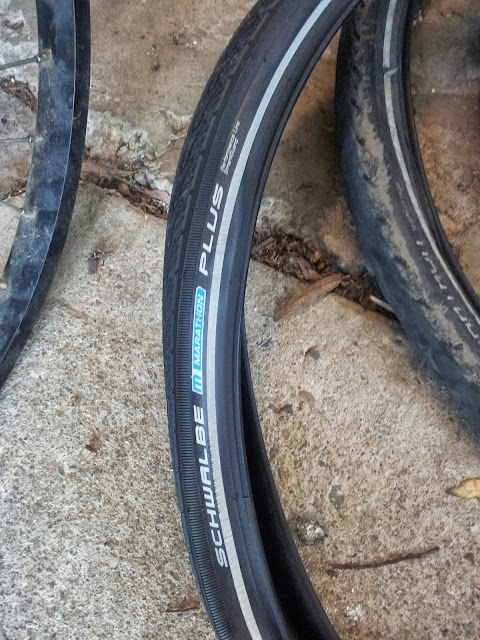 Now it is time to reverse the process, and put the wheel back in.  This is the fiddliest bit, as you have to line up those bolts that you first undid. 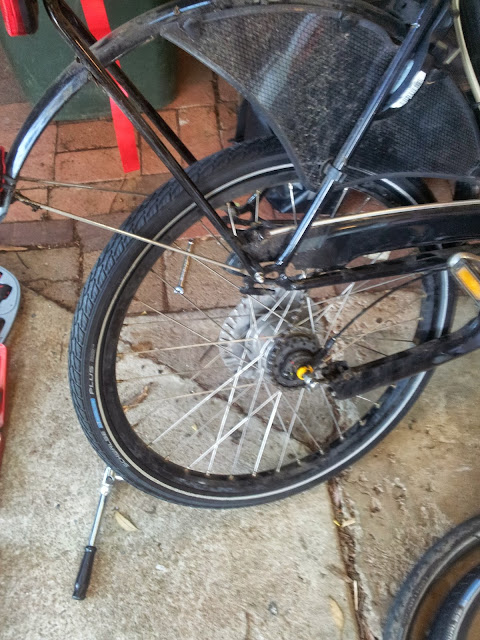 Again, hard to photograph while you are doing it, but five minutes of fiddling and it was back in: 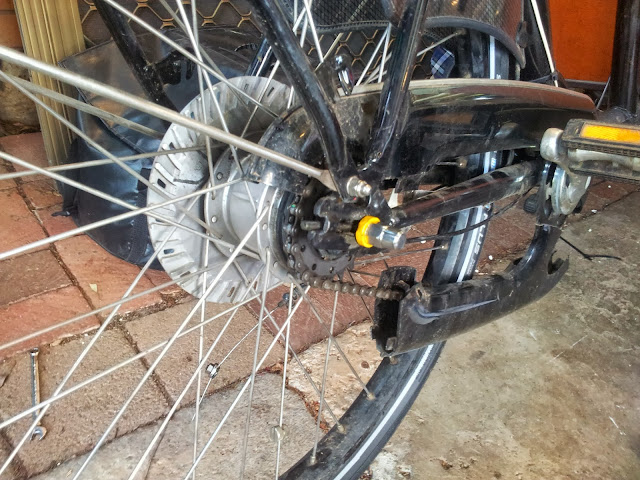 Here is the bolt nicely lined up and back in place, ready to get the bracket and bolt put back on: 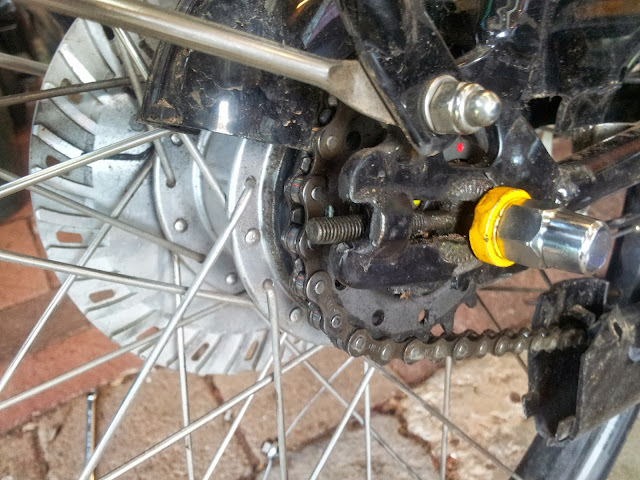 And here they are back on, but yet to be tightened.  Now tighten on each side before doing up the axle bolts, until the chain is reasonably but not too tight, and the wheel is straight.  Then do up the axle bolts. 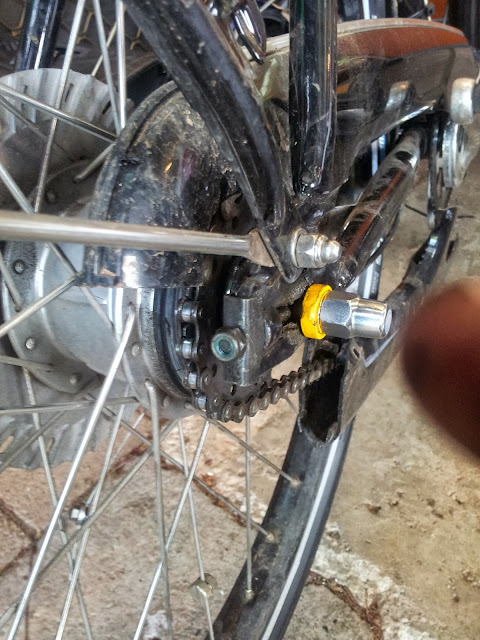 Finally, put the retaining bolt back on that holds the brake to the frame: 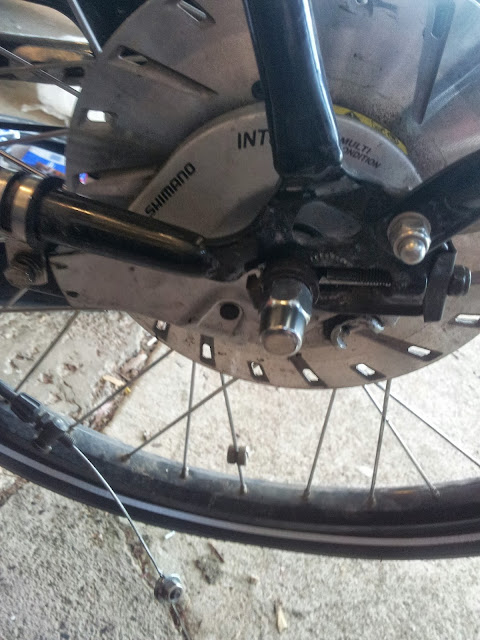 In case you unsure which one it is: 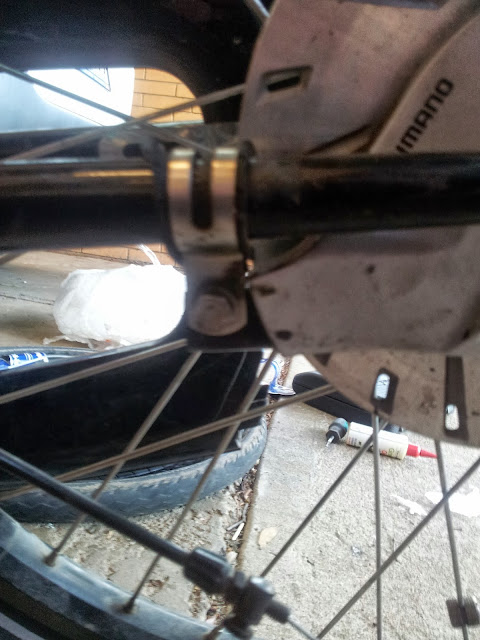 Then put the brake cable and nut back into the spot in the roller brake: 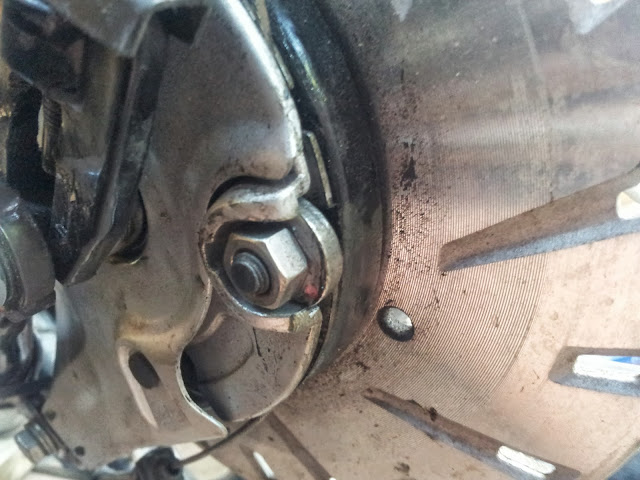 And here is that brake cable lug slotted back in, taken from below. Again, hard to take a picture of on your own with greasy hands: 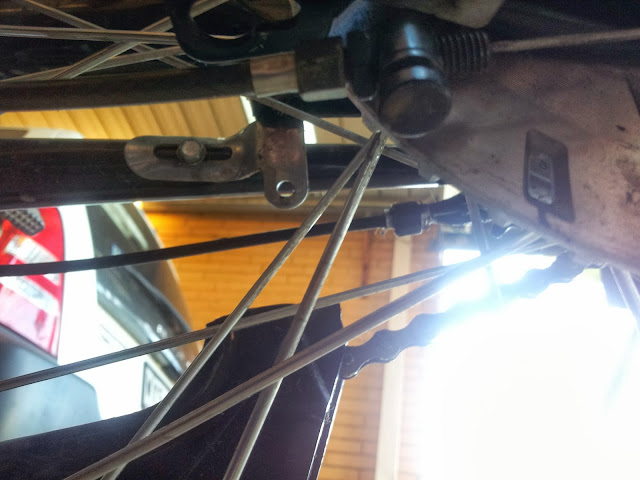 And, ta-da, all back in.  Then it is time to refasten the chain case: 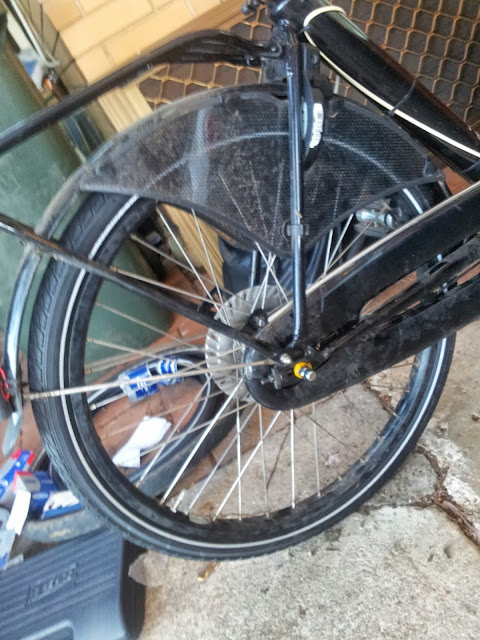 And after that it was time for a test ride, which happily confirmed that the annoying bumping (and several other odd noises) were a thing of the past, and that the brakes still worked: 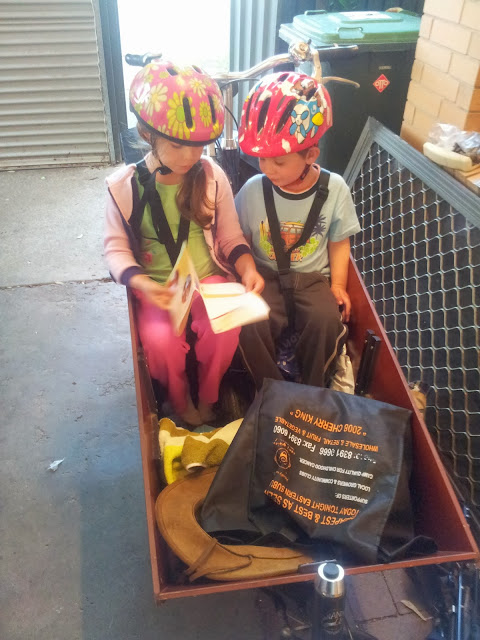 The whole process took me about an hour, but if I had to do it again, it would take perhaps half that.
Posted by Paul Gardner-Stephen at 3:33 PM