Many Australians are caught in a vicious cycle where they own or are paying off older cars with intrinsically high running costs, with maintenance, fuel inefficiency, loan repayments, insurance and registration costs all adding up to several thousand dollars per year. 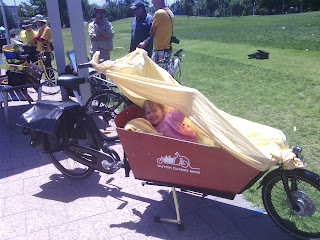 The high cost of participating in this cycle contributes to poverty, and makes it a difficult cycle to escape, for example, by finally purchasing a newer, more reliable and fuel-efficient vehicle. Even then, many of the costs remain, and for Australians on low incomes this represents a significant drain on their limited finances. 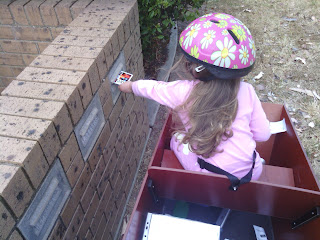 Car ownership is practically a background assumption for suburban Australian life. Most of us don't even question the need for a car if you live in the suburbs, and so this cycle continues to hold many Australians in financial bondage. As a long-time cyclist I had long found my own way to step outside of this cycle riding my bike to work, and easily saving enough to buy a good new bike and go on a pleasant holiday each year. 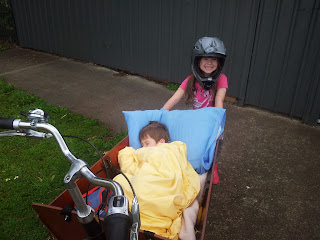 But I am aware that the traditional Australian approach to cycling just doesn't work for many people. The kinds of bikes we ride in Australia are fundamentally pieces of sports equipment, and you need to have a sporty or determined approach, and a willingness to endure a bit of pain, mess, inconvenience and difficulty in the process. If you needed to cart your kids to child care or school, or carry reasonable loads around, e.g., to do the weekly shopping, then the inconvenience rapidly turns to impossibility. 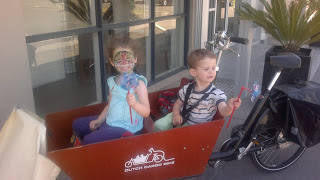 Then through some Danish friends and work trips to Northern Europe I discovered the utility cycling cultures thriving there. Bikes in Berlin, Amsterdam and Copenhagen aren't sports equipment – they are practical, comfortable and convenient transportation appliances.

The differences include many seemingly little things, that together make a profound difference, like a more comfortable up-right riding position and comfy sprung seats, the ubiquitous AXA frame-mounted locks where your key stays in while unlocked, sensible stands that will hold a loaded bike upright (locked and parked in under 10 seconds), proper fenders, chain-cases and skirt-guards that stop you getting dirty when riding, low-maintenance internal hub gears and sealed drum brakes, and thorn-proof tyres with built-in reflectors, through to dynamo lights (with battery backup for the rear, and with the dynamo built into the front hub), low step-through frames that are easy to mount, and copious integrated storage options. 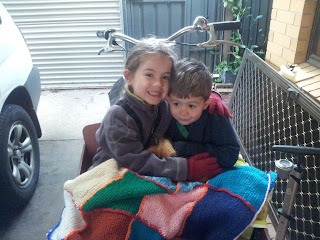 As a result, these statfietsen (city bikes) and bakfietsen (box or cargo bikes) as the Dutch call them are much more practical for life in the suburbs than sports bicycles, in much the same way that a station wagon is more suited to suburban life than is a racing car. Millions of Dutch, Danish and Germans (including many, many Mums) cart children, groceries, building supplies and themselves around comfortably and cleanly using utility bikes. 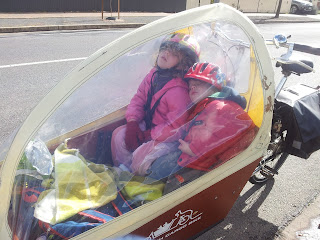 We tend to view these countries as something of an oddity, and their experience as irrelevant to Australian suburban life. However, the reality is that most of suburban Adelaide is about as flat as Amsterdam, and has considerably less wind, rain, snow, sleet, hail, steep bridges and narrow crowded streets than Amsterdam. In short, Adelaide is arguably better suited to a utility cycling culture than in Northern Europe. 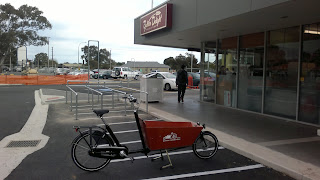 In the year or so that we have owned our cargo bike, I have ridden almost 5,000km, made innumerable shopping trips, carried loads of compost, firewood, bottles for recycling as well as taking the kids to school and childcare and carrying my gear to and from work each day. 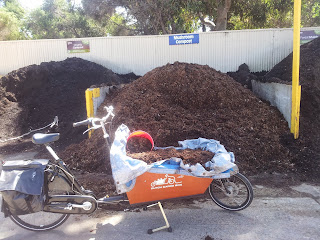 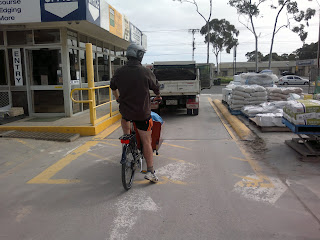 One of the less obvious benefits is how the daily kid-run commute is transformed from a stressful necessity into daily quality time with the kids as we sing, play games, avoid traffic snarls, park in the middle of the school yard, and sometimes give little friends a ride when we get there or stop for a few minutes at a playground on the way. Similarly going to the shops is now extremely convenient, parking right outside the supermarket door. But perhaps the most unexpected benefit is avoiding taxi fares when flying for work, as I now load my suitcase into the bike, ride to the airport, park the bike for free for as long as I am gone, and reverse the process on the way home. 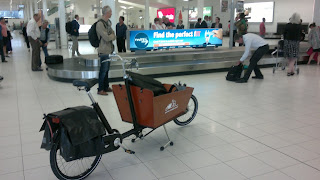 It also turns out for us that it is faster to do the morning kid-run by cargo bike than by car – despite the fairly sedate speeds one attains on a cargo bike full of kids and gear, despite the fact that I only average about 15km/hour on the bakfiets. Part of the gain comes from the ability to ride in the school yard instead of having to find a park, and not have to remove, walk at toddler-speed and re-harness Mr. Two when delivering Ms. One to school.

With the advent of electric-assist on bikes, it is possible to average more like 25km/hour on the flat, in your work gear, and without breaking a sweat. This further improves the competitiveness of utility bikes, especially when you consider that peak hour speeds in Adelaide are mostly between 20km/hour and 35km/hour (not counting the nightmare of parking near schools and child-care centres), and that there are often short cuts available for cyclists, and in most cases there are routes that allow you to mostly avoid the main roads and enjoy a pleasant commute that add to your day, instead of ruining it. 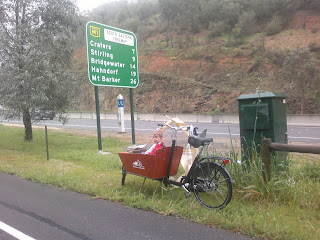 In short, while we may not realise it, there is an option for many of us to escape the car trap – or in the least the two-car-family trap – and save money, time and sanity in the process. But first we have to understand the difference between bicycles that are sports equipment and those that are practical transport, and stop thinking about practical utility bikes as a European oddity. As is often the case, it is the cultural change that is the limiting factor.
Posted by Paul Gardner-Stephen at 4:46 AM