This is not the first year that we have ridden in to the pageant with the kids.  This year it was especially appealing, as our state government is still in the process of upgrading the local railway line, and driving is never a good option to an event that attracts about 20% of the total population of the state in any given year.

This year the kids used the seats in the box to increase their elevation so that they could get a better view: 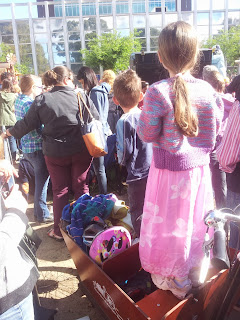 Caleb's attention span was a bit short, so he and I walked around a bit, allowing Mummy to climb in with Isabel who together had a lovely "girls time" watching the floats: 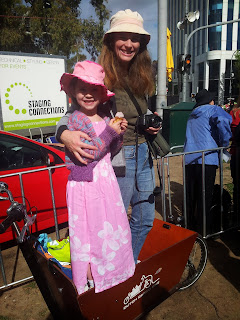 The Adelaide Christmas Pageant is apparently the largest in the world (179 floats, bands and other features this year, apparently), and is certainly lots of fun for little people (and their accompanying big people).  I didn't get many shots of the floats, but

Walking around with Caleb, I had a good chance to see what other bikes people were riding there.  It was great to see a lot of people had ridden in on various "normal" bikes, but I was pleasantly surprised to see this year was the number and variety of cargo bikes that were there.

I don't remember seeing any other than ours last year, but this year there was quite a variety.  Here are pictures of the ones I found within a few hundred metres of our spot on South Terrace where the pageant starts.  I have no idea if there were more (or how many more) along the couple of kilometres of the remainder of the route.


The number of trikes was intriguing.  Some of them were from families with 3+ children, which makes sense for the space.  But at least one parent I spoke to, on learning I had a two-wheel cargo bike, expressed what I took as some regret that they hadn't bought a two-wheeler, as he had realised that the trikes are not as stable at speed.

I remember when I was contemplating getting a cargobike that I was leaning towards a trike, and it really was just someone who made me realise that a two-wheeler is the better option (unless you have too many kids to fit).  They simply asked me two questions: 1. Can you ride a bike? and 2. If so, then why are you thinking of getting a trike?  The implication being that the two-wheelers are a better option, unless there is some reason why you can't ride or use one.

I am inclined to support their view.  Two-wheelers are no wider than a normal bike, substantially lighter (possibly the only sentence where a bakfiets.nl cargo long and "lighter" can be used together ;), handle well at speed (we have had ours up to 65km/hour with kids on board, admittedly down a big hill. They are also typically a bit cheaper.

We also managed a few shots of some of the 179 floats and bands as we walked about. 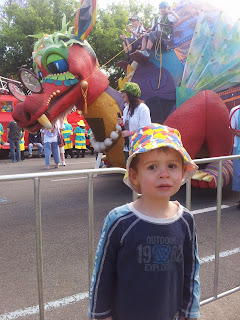 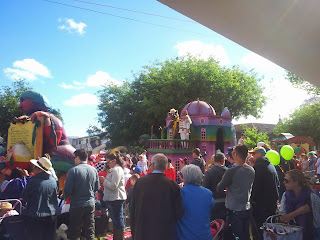 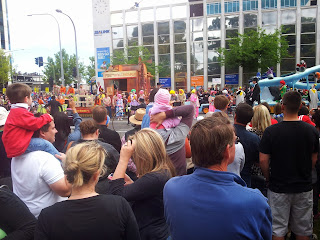 There was even a float with a bicycle theme: 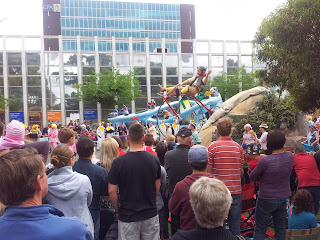 And of course Father Christmas and his reindeer are the cavalry, following the floats to the "Magic Cave" on North Terrace: 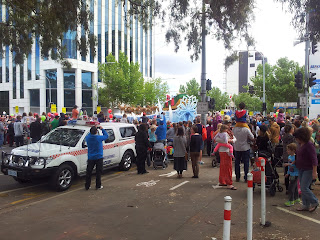 Then it was time to get ready to ride home: 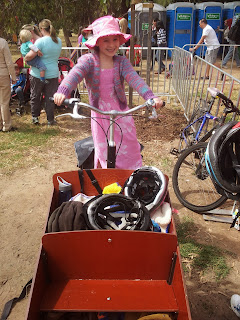 Posted by Paul Gardner-Stephen at 2:30 PM