Bakfiets break-down, and I still beat a parent driving to work in her car

This morning as usual I rode my daughter to school on the bakfiets.  At school one of the other parents we know saw me dropping her off.  We both set off around the same time from near where the Seaford Line crosses Diagonal Road near Marion Shopping Centre to our respective jobs at Flinders University and Medical Centre, a few kilometres away.

I had promised my wife that I would check out whether Trim's work wear store was still in one of the out-buildings at Marion Shopping Centre (it isn't), and then whether Ray's Outdoors on Marion Road had work boots her size (they do).  So I didn't have a very direct route.

I only got a mile or so before the bakfiets started having monumental rolling resistance.  I've experienced this before, the culprit being the back wheel not being seated straight.  There is supposed to be a washer+bolt thing that acts as a tensioner to stop the axle slipping.  I have had them move in the past causing the same problem, so had a good idea what was going on.  A quick look revealed that it it hadn't just moved, but had sheared right off. Almost all of the ring was gone, leaving just a bit of a stump: 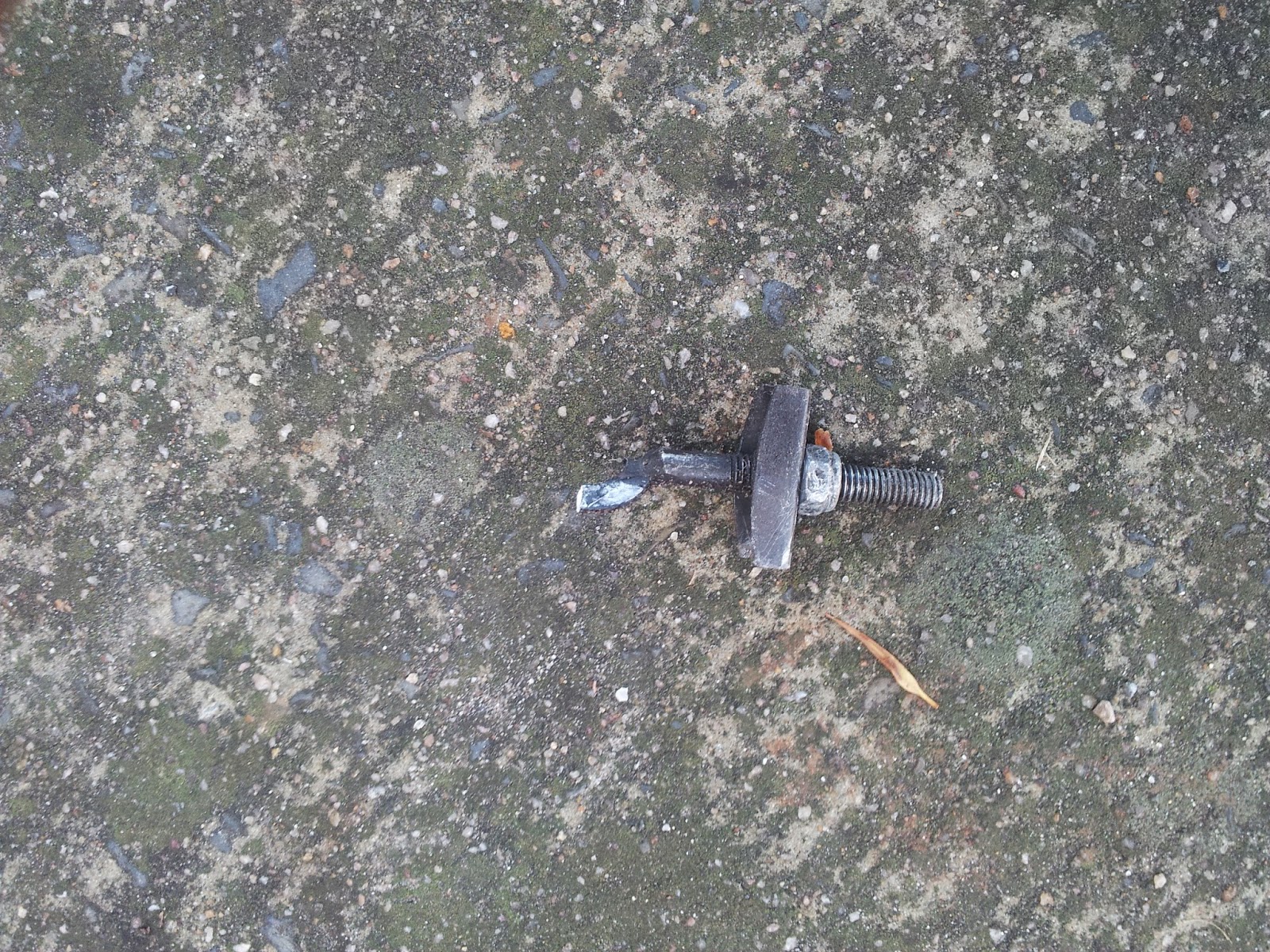 So I spent the next couple of minutes adjusting the wheel to straight (I carry a shifter in the bike for such emergencies), and then on the phone to Dutch Cargo Bikes to see if they had spares in stock, since I knew that without the tensioner the wheel would shift back out of alignment if I pedalled too hard.

I then pedalled off to Rays Outdoors where I spent a few minutes checking out the steel-cap boot options, before heading up to Flinders, where I bumped into said parent, who had just parked her car and was walking to the building.

As I understood her, she had driven straight from the school to the hospital, found a park, and was almost there no faster than I had ridden to work, stopped to make running repairs, gone shoe shopping, and pedalled quite gently so as not to put my back wheel out of alignment.

For me this was one of those episodes that confirmed what I already knew:  getting around by car in peak hour is now slower than by cargo bike, especially when you factor in the parking hassles.

After all that, I still had to fix the chain tensioner.  Fortunately, the bakfiets includes a tensioner on both sides of the wheel, even though the one on the chain side is the only important one.  So I used a ratchet strap to winch up the back wheel off the ground, popped the back wheel out, move the tensioner to the other side, adjusted it, and put it all back together.

The whole job took about 1/2 an hour.  I also adjusted the tension on the rear brake cable which had got a bit stretched over time.

I had intended to take more pictures during the process, but my hands were a bit too greasy to work the phone.  One day I will do one of these jobs with the GoPro camera strapped on. Meanwhile, for more detailed info on how to do this sort of thing, I have another blog post where I did take a pile of pictures when changing the rear-wheel of the backfiets.