Last week I got ready to leave for work one morning, only to discover the rear tyre was dead flat.  As the back wheel is tricky to remove (think about internal hub gear and brake attachments and no quick-release on the heavy duty axle), I opted for the partial removal method.

This turned out to be easier than expected.  The Schwalbe Marathon tyres can actually be debeaded by hand, without so much as a tyre lever if you really need to.  Found the hole by listening for air, patched it, and put the tube back in. 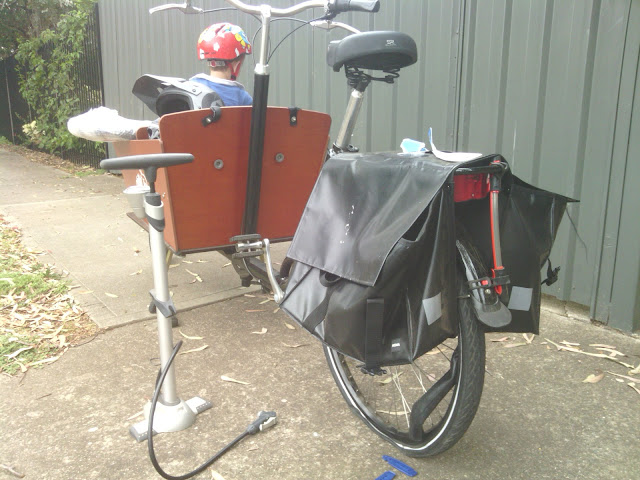 The hole was right next to the seam of the tube, so I suspected that it might leak.  But I really needed to get going straight away, but didn't fancy pumping the tyre up with a tiny little pump.  No problem with a cargo bike: just throw in your floor pump (or compressor and car battery if you like).  Caleb also enjoyed pumping while we rode. 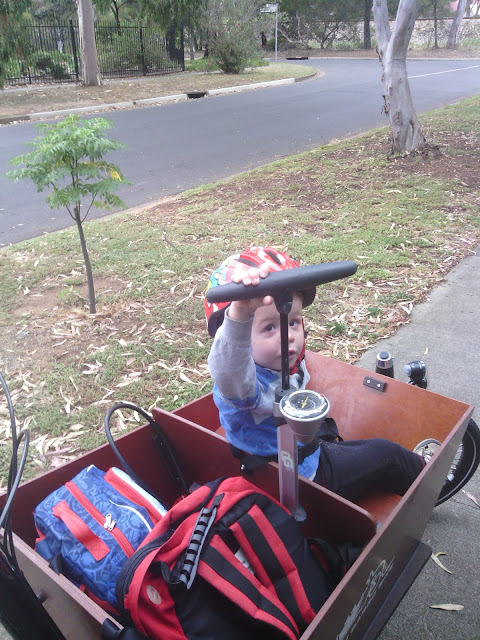 In my haste, I failed to clear the tube of the offending item that caused the puncture, so we did indeed make use of the pump three times on in the 45 minutes from home to childcare to work.  Much easier being able to pump the tyre up in less than a minute each time.

Once at work, I used lunch time to investigate, remove the 1cm metal shard from the tyre wall, and repatch.  Still had the problem that the holes were near the seam, and so the patches were liable to leak. As a result pumped the tyre up once on the way home.

Of course I had been meaning for a while now to buy some tyre slime/goo in preparation for caltrop/three-corner-jack seasons, but my purchase was now expedited as the easiest way to deal with two leaking patches.  A quick visit to Standish Cycles a Marion solved that, along with a "aren't you the guy with the bakfiets?" from the guy at the counter. Turns out he was at the Flinders Uni Ride-to-Work Day breakfast.

This whole episode also answered a niggling question for me, which is whether the Schwalbe Marathon tyres could be considered puncture proof in Australian conditions.  My concern was confirmed.  I had already ordered some Marathon Plus tyres, which by all accounts should be practically puncture proof.  The main difference between the two seems to be the Plus tyres have a built-in version of "tuffy-tape", i.e., a kevlar band.

The advantage of it being built in is that the two main shortcomings of tuffy tape are avoided, i.e., the tape is not wide enough to protect the side walls of the tyre, and the overlap of the tape tends to bite through tubes after a year or so.

So overall an educational experience.

Since then I have also replaced the rear tyre, which involves the whole procedure required to remove the back wheel, which would also be needed if replacing the tube.
Posted by Paul Gardner-Stephen at 1:12 PM

Email ThisBlogThis!Share to TwitterShare to FacebookShare to Pinterest
Labels: maintenance